Wa All Stars forward Paul De-Vries Asare is optimistic of a second leg comeback for his after losing the first leg 3-1 in Tamale. The former Berlin Wonders auxiliary attacker tipped his side to atone for their missed chances with a resounding win in Tunis.

The skillful forward , who returned from injury to inspire the Ghanaian’s to their first ever league trophy, credited the Libyans for their clinical nature but failed to rule out his side from the competition. The Ghana Youth international urged Ghanaians not to neglect them in prayers as they embark on the mission impossible.

“It is a mission we compounded for ourselves on home soil.

“We could have killed the tie in the first leg but we wasted a lot of goal scoring opportunities in front of our fans .

“A resounding win in Tunis is the only way out now having been hammered in Ghana .

“As a group of players representing Wa All Stars and Ghana at large, we have no option but to raise high the flag of Ghana on Sunday “, Paul Asare told Sports Mail.

Richard Arthur scored the only goal for the Ghanaians in a 3-1 win for Ahly Tripoli in Tamale. The return leg is billed to come off on Tunisian soil on Sunday February 19, 2017 with the Ghanaians needing a 3-0 win to progress.

Ghana international, Mubarak Wakasu, showed his class on the pitch in his first ever game for Granada since his winter switch . The nomadic Ghanaian pocketed an assist to mark his return to Spanish football.

The Black Stars offensive midfielder powered Granada to only their second win in ten outings and route out of the drop zone. The 25 year former Panathinaikos midfielder, sumptuously teed up the onrushing Martin Carcela for the opening goal of the game in a 4-1 romp over Real Betis.

The former Espanyol and Villareal midfielder, who enjoyed a two stellar stints in Spanish football, bossed affairs for the beleaguered club as they roared to their third win in the season and second in the last 10 league fixtures. Goals from Adrian Ramos and Andreas Perera pulled Granada out of the basement position in the Spanish top tier.

Wakasu lasted the full throttle for his new paymasters and could be facing compatriot Innaki Williams next week in the Spanish la liga.

Open Letter about Black Stars: Dear Ghanaians, it is about time…..

For the umpteenth time, Ghana feel the need to do a holistic review of its football after another near miss at the AFCON.

For the umpteenth time, people were quick to point out problems rather than find solutions.

For the umpteenth time, players and the technical team were singled out for underperforming

But the biggest question: What have we done?

Our wait for another AFCON trophy has been extended.  For me and a vast majority of Ghanaians, we have not seen the Black Stars winning a major trophy. As a matter of fact any national team which has represented Ghana the nation at international events. The Under 20 class of 2009 are our focal point till date but Sellas Tetteh’s winning team are gradually beginning to phase out because age is becoming to catch up with them.

On 7th January 2017, our dear president urged us to be citizens and not spectators and this is applicable in every context in our quest to dominate football and we must start from now. This 2017 AFCON in particular could potentially be a blessing in disguise and push us to go back to basics

The proverbial “go back to the drawing board” has suffered greatly on the lips of football administrators and it is about time we move to the drawing board as citizens. But before that, we must appreciate that facts that mistakes happen for lessons to be learned.

The 2014 debacle will surely leave a sour taste in our mouth but if we don’t move on from there, we will accrue more pain to what we are currently holding on to. The reaction after the defeats to Cameroon in 2017 and Ivory Coast in 2015 are clear indications the team is still followed even though people will deny it.

Thankfully we have AFCON finalists Egypt, who have beaten us twice on a trot, and Cameroon to take a cue from. Egyptian football went into deep sleep after 2010 failing to make the AFCON on three straight occasions and being battered 6-1 by Ghana in the 2014 World Cup qualifiers.

Cameroon were equally as shambolic as Ghana in Brazil. Their players refused to board a plane to Brazil prior to the tournament because of a bonus row, put up one of the worst displays at the tournament, players fought amongst themselves and yet, 3 years on, the coach can boast of 23 players in camp.

They have accepted their fault as a team, corrected their faults if not entirely and had the support of the public.
Our jobs as citizens is to offer maximum support and offer constructive criticisms. Criticisms cannot be done without in football.

Nothing stopped us from sending Razak Briamah a facebook message or tweet saying: “ Razak, you could have commanded your area better or you could have shouted on John Boye more firmly.”  What we have done in essence is kill two birds with one stone. The keeper has been to understand he could have done better but he has also been given motivation and solutions to do better in subsequent attempts.

Egypt, not for the first time, have shown us that a working league in your own country can fetch you laurels. Not so long ago, Habib Mohammed of King Faisal and Shilla Illiasu of Asante Kotoko starting for Ghana in a World Cup tie against Czech Republic. We had Daniel Coleman, William Tiero and Issah Ahmed playing instrumental roles in our qualification to World Cup 2006. 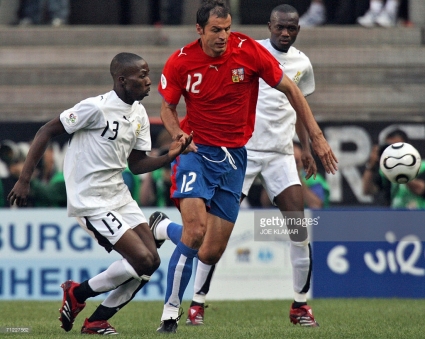 We as citizens must appreciate our local league and give it much attention. We need to treat the league pretty similar to how a man will treat his wife in the early days with love. The current crop of Black Stars players had most of its stars featuring in this league.  Talent has never and will never be a problem for Ghana but the management and how to harness these talents is our bane.

It is open secret the current Ghana Football Association of no clue of how to run a league because it has been on the downward spiral. A club of the ilk of Hearts of Oak cannot attract coaches or pay its monthly arrears. Most fans cannot name 10 players of Hearts and Kotoko combined and we want these players to play in the national team?

We as citizens can push for the development of grassroots football once again. Stephen Appiah and Samuel Kuffour were all products of colts football and we can unearth more. Corporate Ghana can take sponsoring of colts football as part of their Corporate Social Responsibility. Our reward? These younf stars will win us an AFCON.

We as citizens must demand more from our managers of football. What happens to the Under 20’s and Under 17’s. We deserve to know the succession plan after these teams are formed. As it stands, two generations might potentially go to waste. Sellah Tetteh’s class of 2013 which had Ebenezer Assifuah and Clifford Aboagye stand on the same pitch and podium as the World’s Most Expensive Player Paul Pogba as well as the class of 2015 who had Yaw Yeboah.

Sitting on the fence will fetch us heartbreak after heartbreak. It is about time we all stand up to be counted and return the love, passion and national unity we used to enjoy when Ghana is playing. We are falling way behind.

Tunisia secured their place in the Africa Cup of Nations quarter-finals as Group B runners-up with an easy win over bottom team Zimbabwe.

Knowledge Musona grabbed one back but a Wahbi Khazri penalty restored Tunisia’s three-goal cushion by the break.

Tendai Ndoro prodded in a Zimbabwe counter, before Khenissi hit the post in a wasteful second half.

The 2004 champions go on to play Burkina Faso in Gabon’s capital Libreville on Saturday.

Ghana will be better against Mali- Grant

Ghana’s coach Avram Grant is confident his charges will improve their performance against Mali come Saturday in their second Group D match at the Port-Gentil Stadium.

The Black Stars game against Uganda Cranes was below par and  wasn’t the kind of performance many would expect from a four time Africa Cup of Nations winner as well as  finalists two years ago but walked away with a slim 1-0 win.

AFCON 2017: Black Stars to accept any amount as winning bonus

After weeks of facing backlash from Ghanaians, the Black Stars players have resolved to accept any amount proposed by the country’s Sports Ministry as winning bonus at the 2017 Africa Cup of Nations.

The players had appealed to new government to reinstate their $10,000 winning after then sports minister slashed it to $8,000, an appeal that drew a strong negative reaction from fans.

Saucedo’s camp failed to travel to Ghana on Saturday citing reasons of their boxer’s ill health.

South African boxer Mzonke Fana was rushed to the Korle-Bu Teaching Hospital after his IBO lightweight contest with Emmanuel Tagoe.

The 43-year-old managed to finish the 12 rounds of the bout but collapsed after the last round.

A human rights scholar and lawyer in Lusaka says the Football Association of Zambia should go ahead and include a non-discrimination clause in their constitution.

Faz is in the middle of a constitutional review process aimed at aligning its statutes with world governing body Fifa.